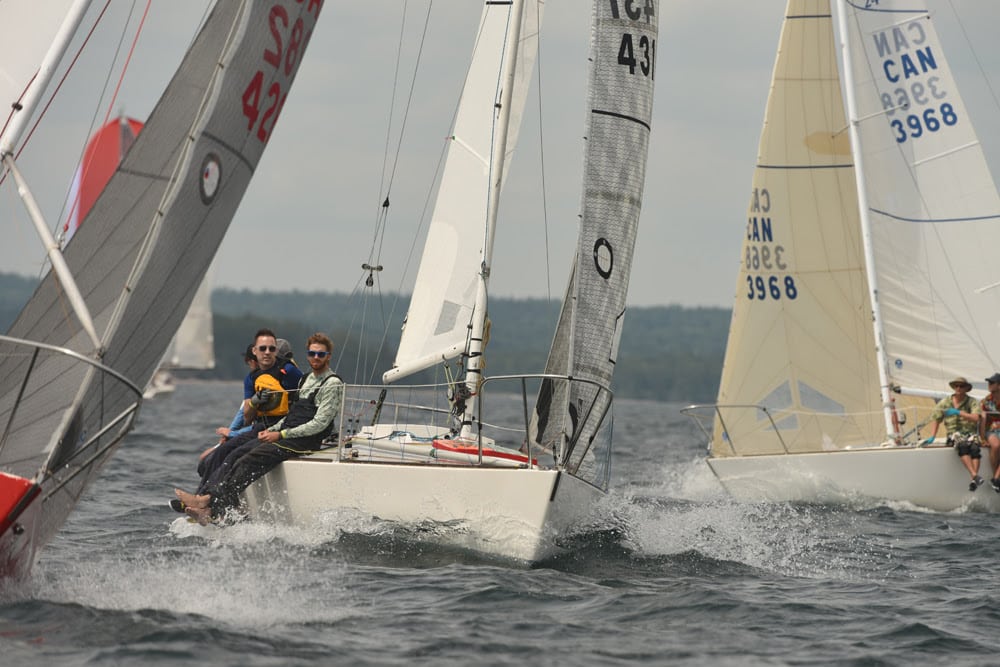 CHESTER, N.S. (August 11, 2016) – The fog rolled in and out until the early afternoon, but winds as low as 12-14 knots made for a calm second day at Chester Race Week, with boats much more in control.

“The winds got up to 20 knots outside the islands,” says Ken Legler, Alpha course race officer, “but it was less than 15 knots inside the bay. The inconsistency of the wind made for a very strange finish, and there was a 40 minute gap between the top finisher and third place boat on the Alpha 1 course.” More results below.

Caption:J/24 Class leader Barely Legal (CAN 431) helmed by David Wedlake of the Royal Nova Scotia Yacht Squadron (Halifax), works her way through the fleet during lighter winds on Day 2 of Chester Race Week 2016.

Hosted by the Chester Yacht Club in the picturesque South-Shore Nova Scotia town of Chester in mid August each year, Chester Race Week is Canada’s largest annual keel boat regatta and plays host to more than 140 boats from up and down the Eastern Seaboard.

The regatta was first documented in 1856 and has since been named one of Sailing World magazine’s 14 greatest sailing events in North America. “Race Week” as it is known locally, sees tourists and locals alike taking in the natural beauty of the area by both land and sea. A community-based, volunteer-driven event, Chester Race Week boasts a full schedule of public-friendly events with yacht races, live music, great food, and daily racing seminars. Visit www.ChesterRaceWeek.com for race and social schedules.